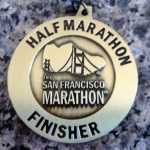 I ran the Wipro SF Half Marathon yesterday.  It landed on Father’s Day and normally I wouldn’t plan to be gone on such an important day but I figured a healthy and happy wife is probably the greatest gift I could give Brad so off I went.

This race is actually a marathon but they offer some cool options for people who wanted to do a half.  You got to choose to run the 1st half or the 2nd half of the race.  As I’ve written before, the first half of the race is hillier and you get to run across the Golden Gate Bridge so that’s the one we choose.

As usual, I never look at a course map but having an idea of where we would start, the fact that we were going over the bridge and a general idea of where we’d finish I expected some great hills and boy, it did not disappoint.

We were scheduled to start at Wave 5 which started at 6am.  It was a clear, cool morning with not a lick of fog to be seen.  At 5:30am we realized we needed to hit the port-a-potties one more time.  Standing in that line we heard Wave 5 go off, then Wave 6.  We made it back to the corral just in time for Wave 7 to start walking to the start line.

The thing I totally forgot about ‘wave’ start races is that you’re lined up by pace.  At Wave 5 we would have been with the 10 min pace but at Wave 7 we were at the 11 plus minute pace.  You don’t think about it until you start to run and are ready to hit your stride but have to maneuver around those runners that are slower.  Again, it was our mistake so we had to jimmy our way through the crowd for a bit.

We ran along the Embarcadero, past the set up for America’s Cup, near Pier 39 and past Fisherman’s Wharf.  Just past Aquatic Park we hit a water stop and then the first hill.  I’ve run this route many, many times and this hill is a beast.  It’s steep and pretty long to the top.  A lot of runners drop to a walk but we keep pitter pattering up to the top.  So far so good.

The run along the Marina Green to Chrissy Field was lovely and we were lucky enough to be on auto-pilot as far as pace and location was concerned.   I calculated that from the Ferry to the bridge and back over would be close to 9 miles.  That would leave 4 to take us to the end.  I wasn’t concerned about the run until we got to the 9 mile mark because then I had no idea where we’d go to get to the end.

From Chrissy Field we cut up the hill to take us to the Golden Gate Bridge.  Normally we don’t take this route to the bridge, it’s a brutal hill.  But up we go and reach the top, level off for a very short bit then climb again until we hit the bridge.  The run along the bridge was the most challenging part.  You’re funneled into one lane about 5 people wide.  The runners who started earlier are coming back in a lane next to you.  To pass people was challenging and many people were stopping to take photos or walk.  (Note:  I’ll post my musings about how if I were in charge, how this and other areas would be changed later this week.)

At the end of the bridge we loop around vista point and come back across the bridge.  The views are spectacular but I’m happy to be off of it at mile 9.5.  Less than 4 miles to go!

From this point we loop under the bridge and run up and up Lincoln Blvd.  It’s a hellacious climb (at mile 10) but we are encouraged by some spectators and cowbells.  Then, mercifully we begin a long descent.  Long and steep – my knees were definitely feeling it!

At the bottom of the hill we cut over to 7th Avenue and run all the way to Fulton Ave.  Flat in spots, some silly hills tossed in and then at the end of the street we cut left onto Fulton and go up a bit then to the right into Golden Gate Park.  A bit of an incline on JFK Drive then over to the finish line we go.

My group split up along the bridge and we re-connected within a few minutes of each other.   Our time was not great – if I discount a bathroom break and the “looking for Johnny, who we thought waited for us at the bathroom but actually kept running” break, I came in around 2:18.  I had hoped for 2:10 including breaks but the hills and our jockeying for position for the first 2 miles and on the bridge added minutes to the clock.  But all in all, it was a good day!

This site uses Akismet to reduce spam. Learn how your comment data is processed.

Enjoy your stay here and feel free to share this blog with friends, family and running buddies!