For Super Bowl LIII (53 – you’re welcome) we had some friends over to watch the game and I served this super tasty black bean soup over lime cilantro rice.

This recipe (courtesy of Chef AJ) has been modified a bit according to my taste and makes a ginormous pot of soup.  Feel free to freeze half of it for one of those nights that you didn’t have a chance to cook but don’t want to order pizza.

Add broth through lime juice to large pot.  Bring to a boil and then reduce to simmer.  Cook for an hour or two until the flavors are developed.  If possible, cook it one day, eat the next.

Use an immersion blender and blend the soup to the consistency you like.  Or take half the soup and pour it into a blender and return to the pot.

Add the spinach and cook for another 30-45 minutes 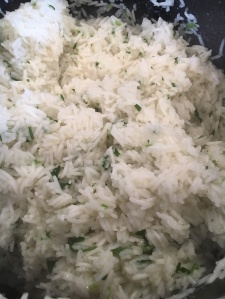 Cook the rice according to directions.  When hot, add the cilantro and lime juice and stir.

Scoop rice into a bowl, top with soup and your topping of choice.  Enjoy.

This site uses Akismet to reduce spam. Learn how your comment data is processed.

Enjoy your stay here and feel free to share this blog with friends, family and running buddies!